This is a reply to Ed Powell writing about IQ.

I believe IQ tests measure a mix of intelligence, culture and background knowledge.

That's useful! Suppose I'm screening employees to hire. Is a smart employee the only thing I care about? No. I also want him to fit in culturally and be knowledgable. Same thing with immigrants.

Many IQ test questions are flawed. They have ambiguities. But this doesn't make IQ tests useless. It just makes them less accurate, especially for people who are smarter than the test creators. Besides, task assignments from your teacher or boss contain ambiguities too, and you're routinely expected to know what they mean anyway. So it matters whether you can understand communications in a culturally normal way.

Here's a typical example of a flawed IQ test question. We could discuss the flaws if people are interested in talking about it. And I'm curious what people think the answer is supposed to be. 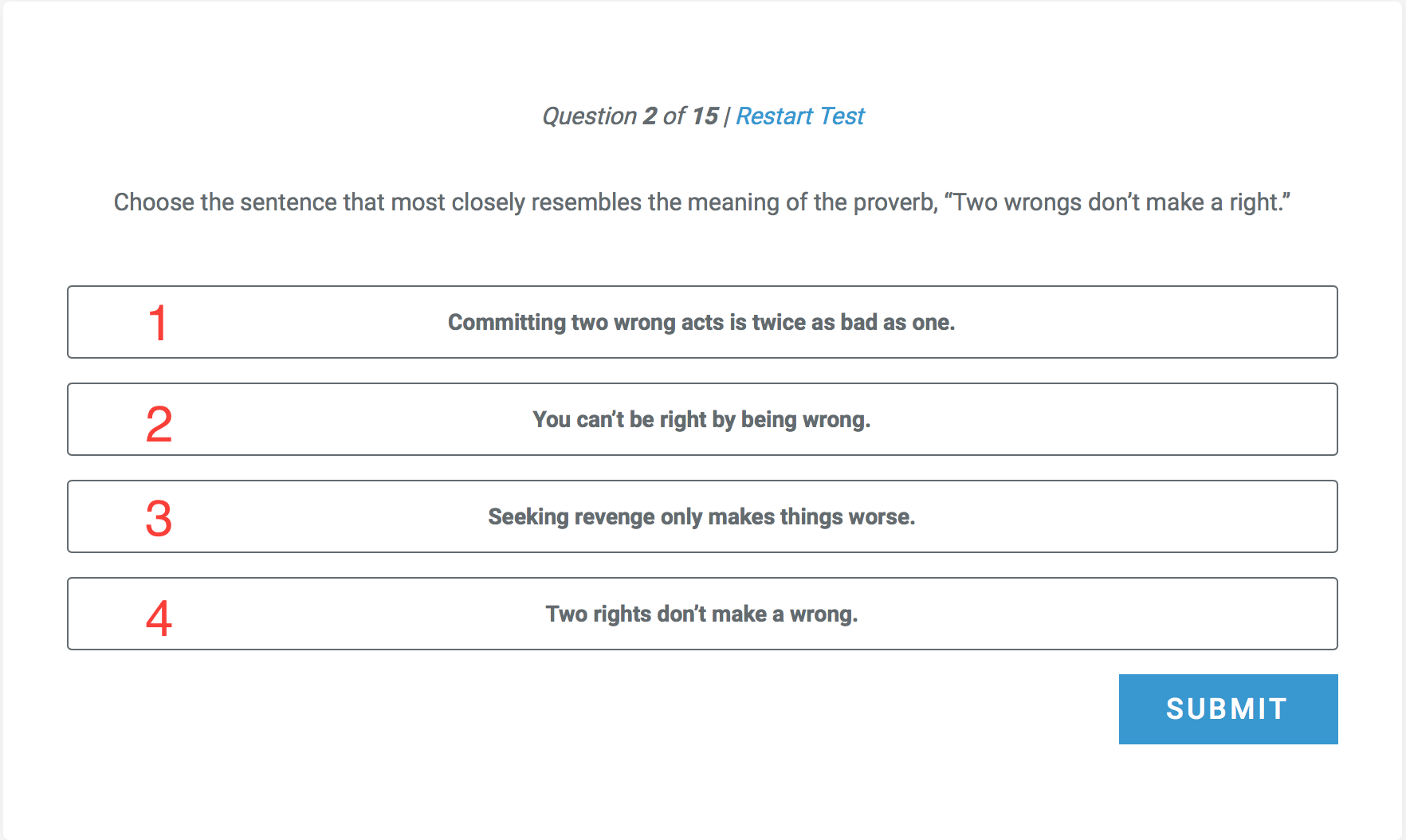 IQ tests don't give perfect foresight about an individual's future. So what? You don't need perfectly accurate screening for hiring, college admissions or immigration. Generally you want pretty good screening which is cheap. If someone comes up with a better approach, more power to them.

Would it be "unfair" to some individual that they aren't hired for a job they'd be great at because IQ tests aren't perfect? Sure, sorta. That sucks. The world is full of things going wrong. Pick yourself up and keep trying – you can still have a great life. You have no right to be treated "fairly". The business does have a right to decide who to hire or not. There's no way to making hiring perfect. If you know how to do hiring better, sell them the method. But don't get mad at hiring managers for lacking omniscience. (BTW hiring is already unfair and stupid in lots of ways. They should use more work sample tests and less social metaphysics. But the problems are largely due to ignorance and error, not conscious malice.)

Since between 60% and 80% of IQ is heritable, it means that their kids won't be able to read either. Jordan Peterson in one of his videos claims that studies show there are no jobs at all in the US/Canadian economies for anyone with an IQ below about 83. That means 85% of the Somalian immigrants (and their children!) are essentially unemployable. No immigration policy of the US should ignore this fact.

I've watched most of Jordan Peterson's videos. And I know, e.g., that the first video YouTube sandboxed in their new censorship campaign was about race and IQ.

I agree that it's unrealistic for a bunch of low IQ Somalians to come here and be productive in U.S. jobs. I think we agree on lots of conclusions.

But I don't think IQ is heritable in the normal sense of the word "heritable", meaning that it's controlled by genes passed on by parents. (There's also a technical definition of "heritable", which basically means correlation.) For arguments, see: Yet More on the Heritability and Malleability of IQ.

I don't think intelligence is genetic. The studies claiming it's (partly) genetic basically leave open the possibility that it's a gene-environment interaction of some kind, which leaves open the possibility that intelligence is basically due to memes. Suppose parents in our culture give worse treatment to babies with black skin, and this causes lower intelligence. That's a gene-environment interaction. In this scenario, would you say that the gene for black skin is a gene for low intelligence? Even partly? I wouldn't. I'd say genes aren't controlling intelligence in this scenario, culture is (and, yes, our culture has some opinions about some genetic traits like skin color).

When people claim intelligence (or other things) are due to ideas, they usually mean it's easy to change. Just use some willpower and change your mind! But memetic traits can actually be harder to change than genetic traits. Memes evolve faster than genes, and some old memes are very highly adapted to prevent themselves from being changed. Meanwhile, it's pretty easy to intervene to change your genetic hair color with dye.

I think intelligence is a primarily memetic issue, and the memes are normally entrenched in early childhood, and people largely don't know how to change them later. So while the mechanism is different, the conclusions are still similar to if it were genetic. One difference is that I'm hopeful that dramatically improved parenting practices will make a large difference in the world, including by raising people's intelligence.

Also, if memes are crucial, then current IQ score correlations may fall apart if there's a big cultural shift of the right kind. IQ test research only holds within some range of cultures, not in all imaginable cultures. But so what? It's not as if we're going to wake up in a dramatically different culture tomorrow...

I don't believe that IQ tests measure general intelligence – which I don't think exists as a single, well-defined thing. I have epistemological reasons for this which are complicated and differ from Objectivism on some points. I do think that some people are smarter than others. I do think there are mental skills, which fall under the imprecise term "intelligence", and have significant amounts of generality.

Because of arguments about universality (which we can discuss if there's interest), I think all healthy people are theoretically capable of learning anything that can be learned. But that doesn't mean they will! What stops them isn't their genes, it's their ideas. They have anti-rational memes from early childhood which are very strongly entrenched. (I also think people have free will, but often choose to evade, rationalize, breach their integrity, etc.)

Some people have better ideas and memes than others. So I share a conclusion with you: some people are dumber than others in important very-hard-to-change ways (even if it's not genetic), and IQ test scores do represent some of this (imperfectly, but meaningfully).

For info about memes and universality, see The Beginning of Infinity.

And, btw, of course there are cultural and memetic differences correlated with e.g. race, religion and nationality. For example, on average, if you teach your kids not to "act white" then they're going to turn out dumber.

So, while I disagree about many of the details regarding IQ, I'm fine with a statement like "criminality is mainly concentrated in the 80-90 IQ range". And I think IQ tests could improve immigration screening.

>Here's a typical example of a flawed IQ test question. We could discuss the flaws if people are interested in talking about it. And I'm curious what people think the answer is supposed to be.

I think the answer is supposed to be 3: "Seeking revenge only makes things worse".