We read about SJW insanity everywhere but somehow it still doesn't seem real. I began new day job recently which brought it all home to me.

On the first day they gave me the organizational goals for the year. One of them was: "Rid the org of bias through implicit bias training."

They made everyone take the implicit bias test online and then dedicated a required two-day retreat to reprogramming all the employees.

There were working groups which produced new goals such "reduce the number of white people." and "rid org of white supremacy bias."

They circulated pre-work reading materials with such titles as "Finding White Supremacy at work" and "How white culture creates injustice."

What's interesting is that these ideas are bubbling up from the staffer level, + forcing management to respond. It's ground up not top down

Management said they hoped hiring me would help break the org of the mind virus. I'm not sure they know exactly what they're getting w/ me.

Some things which are now white supremacist: Objectivity. Individualism. "Worship of the written word." Sense of urgency. Perfectionism.

I walked into a room that had "too many white people" written on the white board. The culture war seems unreal until you see that at work.

I wouldn't ordinarily subject myself to this stuff, but a) the work itself is fascinating and I'm expert and b) it's like being undercover

I'm getting an inside look at shit I thought only existed in paranoid alt-right delusions. It's intriguing to see the mind virus at work.

I suspect at some point after the book comes out, my two worlds will collide. That'll be something. Maybe I'll get fired for truth.

If I get fired from the job for writing, that'll be good for the book. I'll cause a shit storm and the word will spread farther.

And until then, the pay is good, the work is even better, and I get real world confirmation of the culture war at work. Personal experience.

I'll keep cataloging the SJW craziness. If they fire me, I'll have a comprehensive list of EEO violations and file a civil rights case.

Plus, it's great fodder for the current book and future work. They're paying me to get a valuable dose of culture war reality.

I've resisted accepting the culture war as real. I don't want to think along gender divides or racial ones. But they leave me no choice.

I wrote this months ago and now I'm living it today: 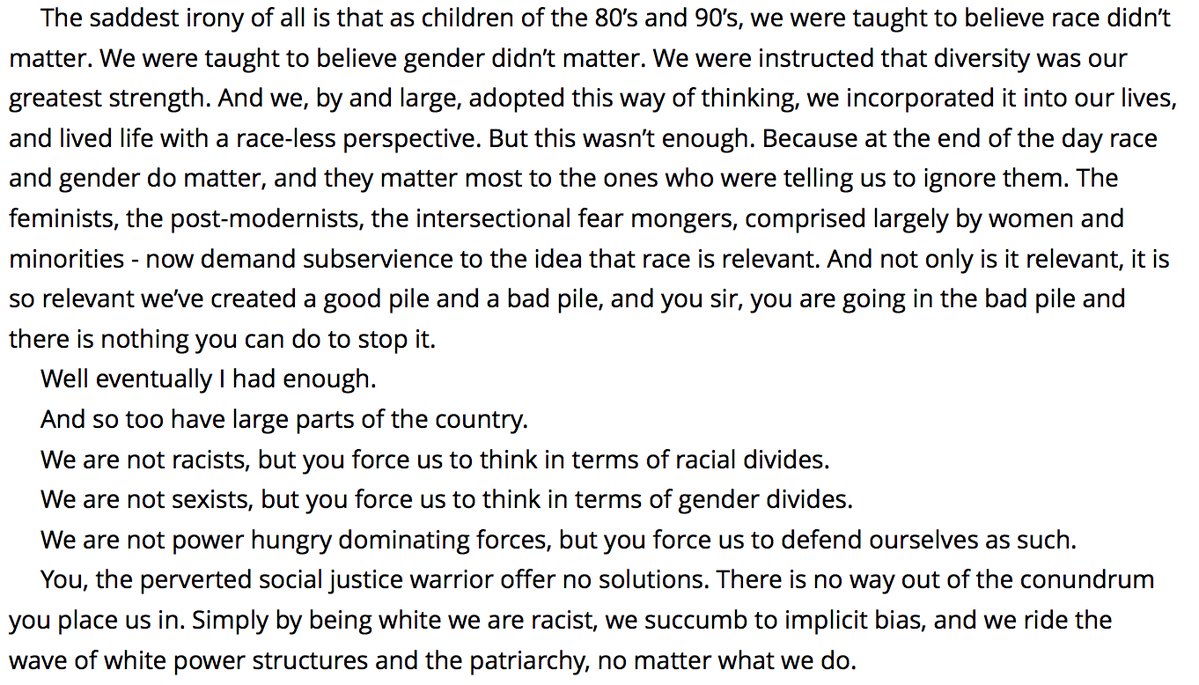